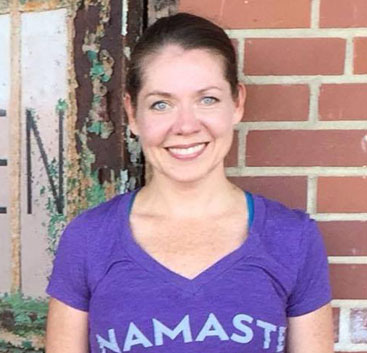 What year did you first start practicing yoga?
I went to my first yoga class, which happened to be my first Bikram class, in October of 2011.

Was there any particular reason you started practicing yoga?
A friend told me about it, I bought an introductory deal and it gave me some purpose and structure that I needed after I lost a full-time job the same year.

Favorite posture and why?
Half Moon – Backbend. It’s a posture in which you have to overcome fear and trust yourself. I consider it quite an accomplishment — physically and mentally — to have progressed as much as I have in it.

Why do you currently practice this yoga?
Second to writing, this yoga has awakened a passion in me. It’s one of the few things that I’ve picked up in life that I’ve stuck with. It’s easy when it’s makes you feel so good — and it’s so good for you!

What do you love about teaching yoga?
I love watching students progress in their practice and cheering them on. Sometimes people need someone else to believe in them before they can believe in themselves. To be a small part of that process is both humbling and inspiring.

Two things most people don’t know about you?
I am a big sports fan — college football, NFL, NCAA basketball, hockey, soccer, curling, fantasy football, etc.
I am a published writer and I have won awards for non-fiction and poetry.